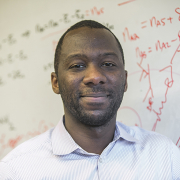 Christopher Alabi received a Bachelor of Science in Chemistry from New York University and Bachelor of Engineering in Chemical Engineering from Stevens Institute of Technology. He received his PhD in Materials Chemistry under the tutelage of Mark Davis at California Institute of Technology. He then moved to Massachusetts Institute of Technology in 2009 for an NIH Postdoctoral fellowship with Robert Langer and Dan Anderson. He joined the Cornell faculty in 2013 as an Assistant Professor in the School of Chemical and Biomolecular Engineering. His early research accomplishments centered around studies on sequence-defined macromolecules and their antimicrobial properties, which have been acknowledged by the PhRMA Foundation Research Starter Award, NSF CAREER Award, the Cornell Engineering Research Excellence Award (2016), and the PMSE Young Investigator Award. His dedication to teaching and mentoring was acknowledged by the 2017 Tau Beta Pi Professor of the Year Award. He was promoted to Associate Professor with Indefinite Tenure in 2019. Research in the Alabi lab seeks to understand how the composition and sequence of a macromolecular chain affect its chemical, structural, and biological properties with an eye towards engineering sustainable materials and biomolecular therapeutics.