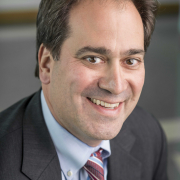 Dr. Chad A. Mirkin is the Director of the International Institute for Nanotechnology and the George B. Rathmann Professor of Chemistry, Chemical & Biological Engineering, Biomedical Engineering, Materials Science & Engineering, and Medicine at Northwestern University. He is a chemist and a world-renowned nanoscientist, who is known for his discovery and development of spherical nucleic acids (SNAs) and SNA-based biodetection and therapeutic schemes, among many other accomplishments. Mirkin received his B.S. from Dickinson College (1986) and Ph.D. from Penn State (1989). He was an NSF Postdoctoral Fellow at MIT prior to joining the faculty at Northwestern in 1991. He has authored >830 manuscripts and >1,200 patent applications worldwide (>400 issued) and founded eight companies. Mirkin has been recognized with >230 awards, including the UNESCO-Equatorial Guinea International Prize for Research in Life Sciences, Kabiller Prize in Nanoscience and Nanomedicine, Dan David Prize, and NAS Sackler Prize in Convergence Research. He served on the President’s Council of Advisors on Science & Technology, and he is one of very few scientists to be elected to all three US National Academies. Mirkin was an Associate Editor of J. Am. Chem. Soc. and is a Proc. Natl. Acad. Sci. USA Editorial Board Member. He has given >870 lectures and educated >300 graduate students and postdoctoral fellows in the lab, of whom >120 are now faculty members at top institutions around the world.