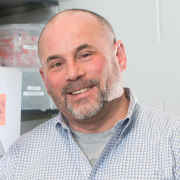 I have had a longstanding interest in lung repair and regeneration after injury, notably gene and cell therapy approaches for lung diseases. In particular, this has included developing novel techniques with which to investigate and enhance lung gene and cell therapies. Recent published work in cell therapy approaches for lung diseases has included several benchmark publications that have included the first ever trial of cell therapy for COPD and that have helped define whether exogenous cells can engraft in the lung. As such, I view myself as a translational scientist whose work spans from benchtop to clinical trials. I have also instituted a biennial meeting held at the University of Vermont, Stem Cells and Cell Therapies in Lung Biology and Diseases, that is widely viewed by the NIH, FDA, and non-profit Respiratory Disease Foundations as the major meeting in the field. My overall goal is to provide a firm scientific basis for clinical application of cell therapies in lung diseases. I have been funded by the NIH, DOD, non-profit Respiratory Disease Foundations, and by industry sources since 1995. Current work in the laboratory is focused in three major areas: 1) Bioengineering approaches for development of functional lung tissue ex vivo; 2) Immunomodulation of lung inflammation by mesenchymal stromal cells (MSCs); 3) Development of cell therapy-based approaches for lung disease.