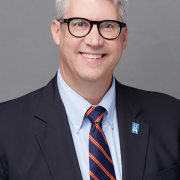 The University of Memphis

Joel D. Bumgardner, PhD obtained his BS Degree with Honors in Biology from Florida State University, and his BS in Materials Science, and MS and PhD in Biomedical Engineering all from the University of Alabama at Birmingham. Dr. Bumgardner was a faculty member in the Department of Agricultural and Biological Engineering at Mississippi State University (1994-2004) and professor and co-Director of academic programs in the Biomedical Engineering Department at The University of Memphis and in the University of Memphis-University of Tennessee Health Science Center-Memphis Joint Graduate Biomedical Engineering Program (2004-2019). He currently serves as Chair of the Biomedical Engineering Department at The University of Memphis (2019-present). His area of research is in the dental/craniofacial and orthopaedic alloys and corrosion and in chitosan-based materials for implant coatings, bone tissue engineering and drug delivery. He has over 105 journal articles, 17 book chapters, 6 patent disclosures (2 licensed for infection abatement therapies using chitosan materials) and 215+ presentations and invited lectures. He is a co-editor of a recent two volume book series on chitosan-based materials. He has mentored over 80 students; 10 of which have received NSF and or Whitaker graduate fellowships, 5 Fulbright Fellowships, and more than 22 students accepted to medical, dental or law school. He has received numerous awards for his research and instruction including the 2012 Outstanding Instructor Award in the Herff College of Engineering University of Memphis, Outstanding Professor (2001 & 2002) Awards in the Bagley College of Engineering, Mississippi State University, and the University of Alabama Engineering School Alumni recognition award as one of the ‘40 Engineers Making a Difference’ 2011. He is an elected Fellow (2011) of American Institute of Medical & Biological Engineering, an elected Fellow (2016) Biomaterials Science & Engineering, and a JW Fulbright Scholar (1994), Umeå University, Umeå Sweden. He is active in several professional organizations such as American Association for Dental Research, the Society for Biomaterials (SFB) and American Institute of Medical & Biological Engineering (AIMBE). He has held numerous leadership positions in SFB including founding member and first president of the National Student Section, Program chair of the 2005 Annual Meeting, and President (2012-2013). He also has held leadership positions in AIMBE including serving as Chair of the AIMBE Bylaws committee (2011-2015) and Chair of the Council of Societies (2016-2018). He is a regular reviewer for the NIH, NSF and DoD and many biomaterials related journals and serves as an Associate Editor of the Journal of Biomaterial Materials Research: Part B.