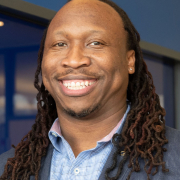 Dr. Manu Platt earned his B.S. in Biology from Morehouse College, and his Ph.D. in Biomedical Engineering from the Georgia Tech and Emory joint program. After postdoctoral training at MIT, he returned to Georgia Tech/Emory. His research centers on proteolytic mechanisms of tissue remodeling during disease progression using both experimental and computational approaches. These diseases of focus are health disparities in the U.S., but global health concerns: pediatric strokes in sickle cell disease, personalized and predictive medicine for breast cancer, and HIV-mediated cardiovascular disease, which has taken him to South Africa and Ethiopia for collaborative work to find solutions for low resource settings. His work has been funded by NIH Director’s New Innovator Award, International AIDS Society, Georgia Cancer Coalition, and the National Science Foundation. Integrated with his research program are his mentoring goals of changing the look of the next generation of scientists and engineers to include all colors, genders, and backgrounds. Aligned with that goal, Dr. Platt, with Bob Nerem, co-founded and co-directs Project ENGAGES (Engaging the Next Generation At Georgia Tech in Engineering and Science), a program paying African-American high school students from Atlanta Public Schools to be researchers in Georgia Tech labs since 2013.