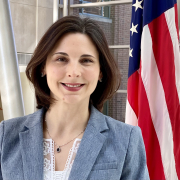 Tina is a creative problem solver, innovator and coalition builder. She is currently supporting the FDA by leading regulatory science and innovation programs. Before joining the Office of the Chief Scientists, she advanced the role of computer modeling and simulation in medical device design and product evaluation during her tenure at FDA. Lauding her work ethic, in 2016 the FDA Office of the Chief Scientist entrusted her with forming and leading an agency-wide working group on modeling and simulation, whose first workshop attracted hundreds of FDA participants. She also headed the drafting of FDA’s breakthrough guidance for modeling: Reporting of Computational Modeling studies in Medical Device Submissions, attracting international recognition, and co-authored the recent draft guidance on Credibility Assessment. Outside the Agency, Tina has led the development of pathways for enhancing modeling credibility and acceptance. For instance, she was selected by her peers to lead a 3-year effort in developing a verification and validation standard for ASME, which culminated in 2018 with the first-ever set of evaluating procedures for computational modeling of medical devices. The FDA recognized this standard for support medical device evaluation. Because of these efforts, Tina was selected as the 2019 Federal Engineer of the Year for FDA. Tina also served as Chair of the ASME Committee on Verification and Validation (V&V) of Computational Modeling, where she lead the development of a methods to assess the credibility of computational models. She helped lead the ASME V&V 40 standard published in Nov-2018, culminating 6 years of work with 40+ industry parterners. She worked with a team at CDRH to implement this strategy into the review of premarket submissions that leverage computational modeling. Tina a mechanical engineer who studied Cardiovascular Biomechanics as a post-doctoral fellow at Stanford University. During that time, she investigated the in vivo biomechanics of the aorta using gated CT imaging; those data are now used as boundary conditions for modeling and bench-testing of devices in medical device submissions. She received her PhD in Theoretical and Applied Mechanics from Cornell University in 2006.